Most people have never heard the name John Edward Ratkowski, but they may have heard the name Rocky Starr.  John changed his name to Rocky Starr as a promising country western music career began to take shape after World War II. He was just a kid barely out of the service when destiny tipped Ratkowski’s hat – literally.

It all began in 1945. John had been honorably discharged from the army and was at the train station in Boston awaiting a train to take him home to Spokane, Washington. He saw a young woman crying on a bench and asked her why she was crying.

John learned that the woman was trying to catch a train to Salt Lake City to meet her fiancé. She couldn’t board the train because servicemen and their wives had priority.

“Why don’t I just say you’re my wife and you can board with me?” John said. And that’s what they did. While waiting, the woman noticed John’s guitar hanging across his shoulder.

“Play me a song,” she insisted.

John played one of three songs he knew: “Tumbling Tumbleweeds.”

Within moments he had the attention of the whole train station. People clapped and cheered. The woman snatched John’s army hat and the crowd started pouring money into it.

“More,” shouted the crowd, and John sang his second and third song. Once on the bus, they counted $50 in the hat. From Boston to Salt Lake City, John sang at every stop, and the woman collected money in his hat. By the time they reached Salt Lake City, they were $200 richer. They split the money and parted ways.

John discovered he had talent that day, but his real story starts with humbler beginnings and simpler means.

Born in Butte, Montana, and raised in Canada, John was convinced he would join the Royal Canadian Mounted Police. He applied at age 16 and was heartbroken when they told him he couldn’t join because he hadn’t been born Canadian. With $50 in his pocket, he crossed the border into the United States. At 20 years old, he signed up for the draft and joined the army.

John spent most of his army days in KP – kitchen police.

“It’s where you go when you get in trouble. I was on KP a lot,” said John, who admits he wasn’t cut out to be a soldier. “I was a good kid, but I couldn’t shoot and I kept ending up on KP for various reasons.  I became a very good cook, but not a very good soldier.”

Destiny had other ideas.

One day, a friend who owned a guitar begged John to loan him $10 to play craps. “I wasn’t a gambler, but a lot of my platoon was, and so I decided to loan him the money if he gave me his guitar as collateral. I had never played the guitar and so I taught myself a few chords and a few songs.” A couple weeks passed and John was honorably discharged.  He was heading home to Spokane and the guitar went with him.

John walked into a music store to buy sheet music for his guitar when the storeowner asked if he was any good. John played “Tumbling Tumbleweeds” and the store’s patrons applauded. The owner told John that the radio station across the street was looking for a singer and he should apply for the job. He ended up meeting Jim Atkins the music director of KHQ Spokane, who incidentally was the brother of Chet Atkins. John auditioned, and was hired to sing the morning show. 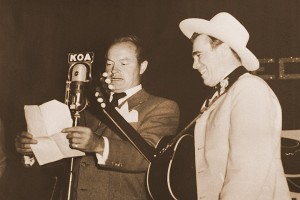 Rocky Starr worked with Bob Hope on many occasions.

John changed his name to Rocky Starr and launched his career as a country western entertainer. He became so successful that he was offered a job at the NBC affiliate station in Denver, Colorado.  He sang on the day show and at night he toured with a six-piece band all over Colorado and Wyoming. The fans were pouring in. He had become so popular that he was granted a lifelong membership to the American Federation of Music. During his career, Rocky Starr had more than 2,000 songs memorized. He toured overseas with Bob Hope in USO shows. He rubbed shoulders with many popular entertainers. He sighs when he recounts the fateful night he took Patsy Cline to the airport.

Rocky Starr continued his career in country western, and then switched to gospel before retiring to Twin Falls, Idaho. As a young man he would never join the Royal Canadian Police. He would never be much of a soldier, having spent most of his time on KP. But on one magical day, having been handed a guitar, a Starr was born.