Like sentinels, stacks of her “first-and-last” book stand in Jaylynne Twiss’ home office. Surrounding her, they remind the Paul resident of traveling the past 30 years as a popular motivational speaker, a path she never planned to navigate.

“When I started, I thought, ‘What did I, a housewife and teacher, have to say that was so special?’ I was living an extraordinarily ordinary life,” says the 65-year-old mother of five and grandmother of 14. 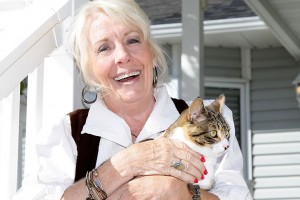 Turns out, Jaylynne had plenty to say and still does. Even after three decades, her calendar is still packed with bookings to emcee local community events or motivate audiences with her core message.

“With encouragement and humor, you are powerful enough to solve your problems and have a fun adventure doing it. It’s your life. Why would God put you here and say you aren’t capable of living it successfully?”

Like her unplanned speaking career, Jaylynne never planned to write a book.

When her kids and grandkids began badgering her, she finally relented and compiled 51 of her most popular stories into a manuscript, an undertaking that took about two years.

“It’s the biggest mistake of my life,” she says laughing about her 221-page, self-published paperback called “Where Are We Going? (And when will we get there?).”

“It’s not in a narrative form. It’s just standalone stories I’ve told over the years.”

In her stories, Jaylynne tells how her faith and humor have been her shock absorbers, helping her to cope with life’s speed bumps while rearing her children, earning master’s degrees in psychology and business administration and facing the pain of kids’ car crashes, surgeries and deaths.

Since “Where Are We Going?” was published in September 2010, she has nearly run out of copies. “Almost every day, people call me to buy a book. I never expected this kind of response.”

She never expected such a positive response, either, when she started speaking. She blames one of her students at Burley High School, where she taught English, for her first motivational talk back in 1980.

“He told his dad about me, so his dad, who owned a business here, called and asked me to pump up his employees to start the new year right. It got out of hand pretty fast, and I was traveling a lot.”

Jaylynne was the speaker at the Burley Public Library Foundations Legacy Project fundraiser.

One day in 1983, Jaylynne’s husband, Max, sat her down and gave his own motivational talk. “He told me I should be receiving a fee and charging for travel expenses. A few hours later, I had two phone calls, one from someone in Blackfoot and one from a person in Idaho Falls. They were both happy to pay me, so I asked for $50 and for $90. After that, I worked up a fee schedule. The most I ever received was $6,000 for a weekend event in California.”

She booked her talks around her kids’ activities and her work schedule, teaching at Burley High School and at the College of Southern Idaho.

“All those talks helped our kids get through college,” says Jaylynne, who retired from CSI in 2008.

Although she retired, Jaylynne is still teaching, these days on the speaking circuit instead of in a classroom, as she shares life lessons with her characteristic doses of wit and wisdom.

“I’ll never retire from giving my talks. I’m having too much fun to ever quit.”

As for a sequel to her book, Jaylynne says she refuses to write another one, but you never know. If enough people start badgering her again, she just might relent and write her “second-and-last” book.