“You got the sniff, snot, snort, snuff, hack, spits, sputter, sneeze, toot, wheeze, blow, bark and sputter? Have you got the aches, pains, strains, toots, squats or squints?”
The list of symptoms rolls off Dr. Don Pates’ tongue faster than this 83-year-old can fly down a ski hill – which is remarkably fast.
In the 55 years Dr. Pates has been practicing, he’s seen it all. But no one has ever seen a case quite like Dr. Pates.

While most people his age have been retired for 20 years and are enjoying the golden years in a rocking chair, Dr. Pates is enjoying life on a ski slope, motorcycle and golf course. But that’s in his spare time – when he’s not working full time or serving as the medical director for the 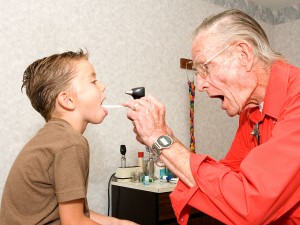 local hospice program. Dr. Pates refuses to retire.
“You’ll read about [my retirement] in the obituary column,” he says. “I enjoy it. I like the challenge. I like working with people. It beats being a fat, alcoholic couch potato.”
All the patients he’s treated over the years have had one common symptom: the chuckles.
“He always cracks jokes,” says Sharon Campbell, a patient from Burley. “He’s just down to earth.”
While Pates likes to joke, he takes doctoring seriously and doesn’t beat around the bush when giving diagnosis.
“Dr. Pates just tells exactly what the problem is,” Campbell says.
Dr. Pates cheerfully greets his patients and knows each by name. His demeanor and sincerity make this country doc seem like a part of the patients’ families – like having a father or grandfather with an M.D. 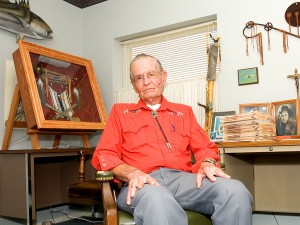 Dr. Pates office has lots of indian artifacts on display.

Ironically, Pates had no plans to become a physician while attending college in Iowa, where he studied to become a chemical engineer. That’s when Uncle Sam came calling. World War II raged in Europe, and the 21-year-old was trained as a medic and sent to Germany. His unit was one of the first to liberate the Dakow concentration camp.
“As far as I know, I never got shot at; I never got snipped at,” he says.
Following his wartime service, Pates returned to college, but this time with plans to become a doctor. He found being drafted proved a mixed blessing as the government paid for his schooling.
“By the time I got out of the service, my dad had a couple of strokes. He couldn’t afford to put me through medical school and in those days there were no student loans. If it hadn’t been for the GI Bill, I never would have made it,” he recalls.
After a year and a half of pre-med and another four years of medical school, Pates moved to Michigan and set up practice. In 1971, Pates moved to Rupert, along with his wife Elaine and their daughters, Colleen, Karen and Carla. Dr. Pates has worked here ever since. 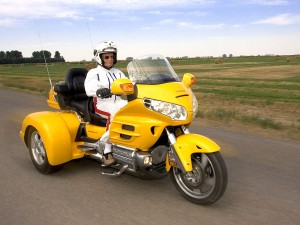 Pates is an avid motorcycle rider.

Many patients claim Dr. Pates has a sixth sense because he instinctually knows what’s causing most health problems. Now in his sixth decade of doctoring, Pates recognizes illnesses right away. A devout religious man, Pates believes in a higher power.
“It’s either that or the guardian angel sits on my right shoulder,” he says.
He jokes that his guardian angel “kicks me in the ribs and says, ‘Don’t push your luck.’”
But Pates still pushes his luck as he flies down the ski slope. “It’s the freedom of movement. I don’t have to have my cell phone with me,” he says.
He attacks every trail at Pomerelle Ski Resort, where he also serves as a ski instructor.
“It’s fun watching people being able to enjoy themselves as they get better,” he says.
Other skiers often quiz him about his age.
“They’ll say, ‘How old are you? You’re

Pates is often found flying down the slopes of Pomerelle Ski Resort.

Pates once found his doctoring skills came in handy on the ski slopes when, on New Year’s Day in 1973, Pomerelle’s ski lift rolled backward, causing numerous injuries.
“It was blue sky and bright sun. It was a beautiful day. Every chair lift was full,” he remembers. After a few runs down the mountain, Pates went inside the lodge to get warm. Outside, the ski lift suddenly started rolling backward, causing people to fall. Dr. Pates was quick to the scene, attending to the injured skiers.
“It was a real mess,” he recalls.
After the snow melts and the grass greens, Pates can be found on the golf course. It’s a hobby he started four years ago thanks to the urging of his current wife Jeanne.
“It’s the most frustrating, difficult thing I have ever done – but it’s addicting. It’s challenging, kind of like skiing.”
And when he’s not skiing or golfing, Pates enjoys riding his motorcycles.
“Everyone asks, what the hell is a guy my age doing riding a motorcycle? It’s independence. It’s the sights, sounds and smells.”
Pates’ family gives him a hard time about his motorcycling; when his daughters were teens, they were forbidden to ride

motorcycles – they were too dangerous.
Fast forward to 1998, and Pates suddenly had egg on his face following a motorcycle crash. While visiting Michigan, Pates was riding his motorbike when the car in front of him took an “unannounced left turn.” The next thing he knew, he was somersaulting over the car and landing on the pavement. Pates broke his pelvis and was in the hospital for a month. He spent another two weeks in a rehabilitation unit.
“I got a lot of ribbing,” he says.
Before long, Pates was back at his Rupert practice – albeit on crutches. He credits his quick recovery to “a combination of good healing ability, determination and not giving up – or it’s orneriness and stupidity,” he says.
That same orneriness and stupidity may also be responsible for his weakness toward cigarettes. He has smoked since he was 18 and says he hasn’t suffered any major ill effects from lighting up.
“I’ve tried everything to quit,” he says. “I’m not like Bill Clinton – I did inhale. I’m smart enough to know better, but dumb enough to go ahead anyway.”
But everyone has an addiction, he says. “Some sit on theirs, some people smoke it and some people drink it.”
Pates’ mother lived to be 101. “My mom’s father was a barber. My dad’s family had itchy feet; they were nomads. There’s no secret family gene,” he says.
Yet the Pates family did hold one secret: Great-grandpa Pates married a Lakota woman.

During that time, being of Native American ancestry was cause for ridicule. For generations of Pates descendents, it was a dreadful shame. That was until Don Pates learned the secret from his mother.
“I thought, ‘Cool.’ We don’t know whether he married, stole or bought her. He was either a horse trader or a horse thief,” Pates says of his great grandfather.
Retracing his roots, Pates later visited the Lakota reservation in South Dakota and was shocked by what he saw.
“We have got our own third-world country here,” he says.
The Pine Ridge Indian Reservation lacked infrastructure and basic goods. In 1998, Dr. Pates gathered up some belongings and took them to the reservation. He continued to take goods for the next eight years. In 2006, Pates delivered a semi-truck, a trailer and his station wagon full of goods, including clothes, food and toys.
“The people – especially the kids – went crazy,” Pates recalls. The Lakotas stocked their cars so full there wasn’t room for anyone to ride. “They had to take the stuff home and come back. I felt a real connection. Doing this reminds people that the Lakotas are real people.”
His love of people and life combine to make Dr. Pates a one-of-a-kind. What are other doctors his age doing?
“Most doctors my age are dead,” he says. “God’s not ready for me, and the devil doesn’t want me – I’d raise too much hell. When I die, I don’t want to be neat and clean. That’s my motto. What a ride.”

“Everyone asks, what the hell is a guy my age doing riding a motorcycle? It’s independence. It’s the sights, sounds and smells.”